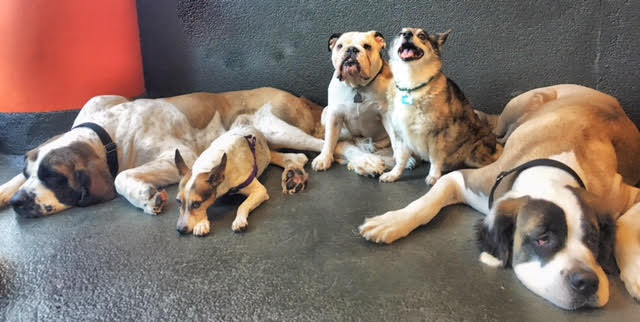 One of the most useful commands for dogs living in an urban environment is “leave it”. It’s useful because we are scavengers. NYC is a culinary mecca for dogs– there are so many delicious things on the street: the pizza crust, the half eaten bagel and my personal favorite– chicken bones. But as a wise, senior dog, I’ve learned that three days of cannon butt is not worth three seconds of deliciousness. Here’s how you can teach your dog self-restraint.

Start with your dog on leash and make sure you keep your leash-holding hand glued to your side so the leash length does not vary. Toss a treat out of your dog’s range. When he gets to the end of the leash, don’t budge. He’ll pull then realize it’s not working. Eventually, he’ll look up and default to sit. Immediately, give him praise, followed by several more tosses until he continues to focus on you instead of looking to the treat on the floor. Continue to praise the moment he surrenders, sits, and looks up. When he’ll look at you for at least two seconds, give him the ultimate reward by releasing him with a verbal “Ok” and walk towards the food on the floor so that he can get it. If you never want him to pick food up off the ground, then instead, walk over and pick it up for him while he remains seated and then give it to him while he’s still sitting. In both cases, he’s learning he can have the thing on the ground if he just asks your permission. And he may get something better for sitting and asking you first. In reality, he can’t have everything on the ground, but he won’t think of that if you make it a habit to not pick things up off the ground. Once he reliably sits in front of you within one second after you drop food on the floor or right after he gets to the end of the leash you can start training the leave-it cue by saying “leave-it” in a firm, fair tone right as you toss the treat.

Start by blocking your dog from getting the treat by standing in front of him without a leash. Outmaneuver him by quickly moving to block his path saying the command “Leave it”.
Start with him in a standing position and drop a treat in front of him, but in a direction that you can step between him and the treat as soon as you drop it. At first he may move from side to side trying to get to the treat. Keep outmaneuvering and blocking him until he stops and looks at you and then finally sits. Reward him immediately when he sits and looks at you. Next stand aside so he has a clear path to the treat but don’t let him charge for it. Block him if he starts to look at the treat or gets up to move towards the treat. If he remains seated and looks at you for two seconds, then release him to get the treat or pick it up and give it to him. As with Version 1, train in the cue word “leave-it”, once you know he will reliably back off and sit when he sees you block him.