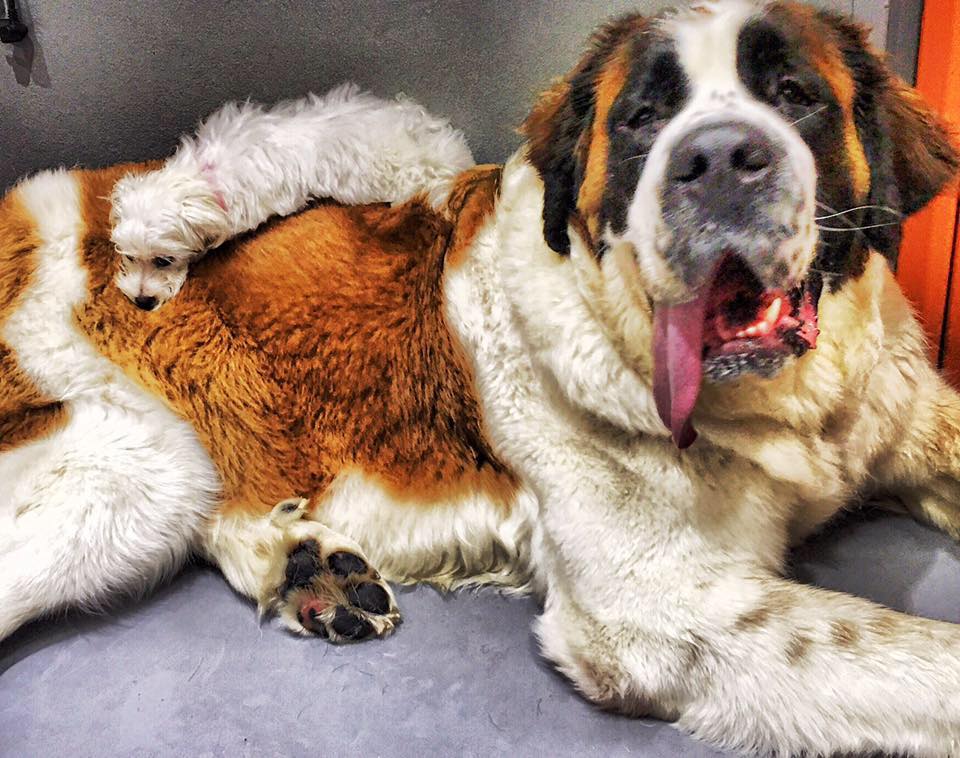 A few days after I adopted him, Masa and I visited the vet. While Masa lay on the floor, I conversed with the receptionist about his history. The receptionist approached Masa. The giant growled in fear and lunged at the man. I pushed him down and firmly corrected his u-necessary antic. Masa surrendered immediately, but a spectator that was listening to our conversation in the waiting room was offended: “He was abused! You shouldn’t correct him like that!”. The bystander’s viewpoint was well intentioned but wrong. I politely thanked her for her input, but replied “I will correct him when necessary. He is my responsibility, and I will show him what’s right and wrong”. She silenced. 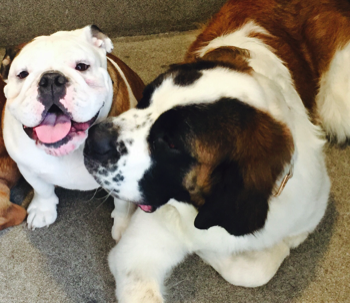 Building a relationship with your dog is the key component in dog training. Without knowing the dog, we’re unable to understand what he needs. Without understanding what he needs, we are unable to fulfill it. Unless his needs are fulfilled, we are unable to build trust. Without trust, there is no bond. Like all relationships, trust and confidence builds a concrete bond. In order to have a frustration free, happy partnerships with our dogs, we need more than just love and training. For a relationship to truly thrive, we must cement a bond based on trust and mutual respect. And in Masa’s case, feeling sorry for him was not going to do him any good.

We frequently make the mistake of approaching dogs with our point of view because of our limited knowledge of what dogs actually “think”, and what their rituals are. We constantly misinterpret and misunderstand dogs due to our own ignorance, and that is the primary cause of most behavioral issues in dogs.

First and foremost, we must acknowledge that we are trying to form a partnership with a different species. He is a dog, not a human. He does not think like us. He does not intellectualize. A dog behaves a certain way due to their genetic inheritance with the language that they know as a species– the dog. They are Canis Lupus Familiaris, not Homo Sapiens. But we interpret the dog and their behavior through our lens– which can be very frustrating and confusing to a dog. 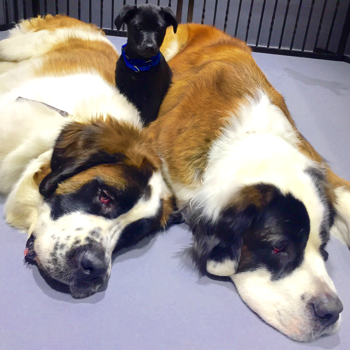 And what is a dog? They are predatory pack animals that thrive on strict hierarchical structures. Herbivores like zebras function in a herd. It’s a low structured group where size, strength or capacity does not really matter. The relationship between each animal is not strongly bonded by any reason other than that they have a better chance of survival as a group. On the other hand, predatory pack animals such as dogs and wolves count on one another for their survival as a team, lead by a pack leader. Hunting, for instance, is an action that requires precise participation of many, if not all by most of the pack members. Domesticated dogs have some perception about you putting food in their dish, but since there is no action involved to get that food, there are many missing links about where that food is coming from. If we mindlessly pour food in their bowl without any structure or behavioral participation on their part, you’re just their food dispenser.

Expanding and defending territory is also crucial for pack survival, where all the pack members also participate in this ritual. Most domestic dogs do not live this way, as they are encased in their apartment or back yard with rare opportunities of outdoor exploration. A dog is nomadic and identifies hierarchy through the act of travelling with their pack leader. Without this ritual of travelling with his pack, frustration builds– because they want to investigate the world with you. For domestic dogs, this need can be fulfilled through leash walks and hikes. They need outdoor time with you as the leader.

What does a dog need, and how do you build a concrete bond with the dog? No matter what breed, size or age, their need is the same. Like all animals, the primary motive of their existence is survival. And in a dog’s case, to survive, they need: leadership/discipline, food, safety, socialization/interactions, exercise/purpose and love. A pack structure.
Based on Masa’s excessively fearful behavior, it was clear that none of these needs were ever met. A series of human created bond infractions such as physical punishments, inconsistent and unfair leadership diminished his ability to trust humans. I’ve worked with fearful dogs, but his fear of food was a rare. A food driven breed that’s clearly emaciated refused to eat in the presence of dogs and humans. If food was presented to him, he retreated, as if to anticipate punishment. He cowered at the sight of people and dogs. He jumped at human touch. He trusted nothing, and no one, except for me and Yama, his Bernard brother. But I knew that this novel bond was superficial and thin– the slightest bond infraction from me can damage any potential that remains.

He needed a concrete bond through consistent and fair leadership, for this giant dog would be a potential liability if I failed to rehabilitate him correctly. I had to lift his confidence, show him what’s good and bad through clear behavioral markers, and navigate him through various environments and variables to make him feel safe. To remove his defensive stance, I had to make him feel protected. That I would handle his apprehensions as his leader, and most of all, to make him realize that the world is pretty awesome and innocuous. 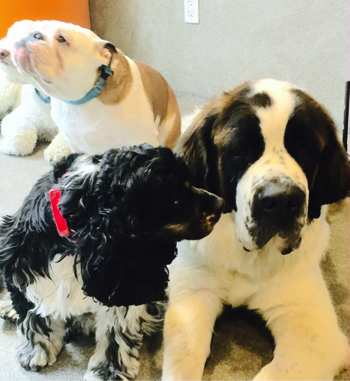 Five days after being in his new home, in the middle of the night, I heard sounds of the metal dog crate moving. I walked out to the living room, and Masa was standing in the dark. I was tempted to scold him for the escape from the crate, but his “Look what I did!” face with a nervous pant made me laugh heartily. His giant tail humbly swooshed for the first time, and that was the first glimpse into his sense of humor. It was our first real moment of the potential to bond.

Basic obedience training and leadership are crucial in building a well mannered dog. But many spend tremendous amounts of time correcting dog behaviors that actually occurred either because the dog is simply not trusting the owner, or there is no connection between them. Incessant corrections without understanding or connecting with the dog is counter productive. Training does not solve every canine challenge. There’s way more to it, because they are sentient beings with a soul. They need to connect, and they connect through identifying you as their pack leader whom they can trust. It’s just like a relationship with humans. How fruitful is a relationship with no trust, chemistry or spark?

In most cases, our expectations of our dogs are contradictory to our dog’s nature. We expect them to be polite and obedient, but we forget that they expect us to be their pack leader. Great pack leaders provide purpose. Dogs expect us to lead them in normal, day to day dog activities like hunting, building territory, and expanding the pack. So take them daily, on vigorous walks with this in mind. Discover the streets, parks, and trails together, because that’s where your dog relates with you best.

In Masa’s case, I consistently introduced him to four environments. No matter where he went, he was to feel safe. On the streets with a leash, he was praised for greeting strangers. Off leash in the dog parks, I boosted his confidence by applauding every favorable approach to humans and dogs, however minor. At Dog City, he learned to interact with dogs and the handlers in a safe, controlled environment. Off leash during hikes, I led each step he took and exalted positive curiosity and recall. I carefully observed his reactions to the world that surrounded him, as each moment was my opportunity to mark his feelings and actions as good or bad. If negative variables such as aggressive dogs approached, I took the lead and ushered such dogs away from contact. He was to never experience the need to retaliate nor defend– that’s my job as his pack leader. If Masa retreated favorably from negative variables, he was congratulated profusely. If he displayed contempt or defense, he was firmly corrected. He also imitated Yama’s every move because he trusted his decisions. During these activities, I laughed at him frequently. I laughed or often spoke in goofy tones because he shouldn’t take life so seriously– my laughter always loosened his grip on fear. A sense of humor is the essence of a dog, and we were going to build it.

Masa is now a perennially happy, reckless, 140lb behemoth. He nose dives into rivers which he once found petrifying, and pounces into the deepest snow banks. He gently plays with puppies and small dogs. He wrestles with the big guys with gusto, tears into trash and smiles when disciplined, rolls in horse manure and approaches life like a carefree renegade. A once hand shy dog who flinched at every move now boxes my hand with his nose. He no longer displays fear at food– instead, he counter surfs in search for more, sliming everything in his path. His confidence surpassed my expectations in six months. He is no longer damaged, but an over confident, adolescent Bernard requiring a healthy dose of strict obedience. His whole is yet to fully bloom, but that’s up to me. How much I can connect, is how far I can take Masa. How far you connect, is the distance you’re able take your dog.