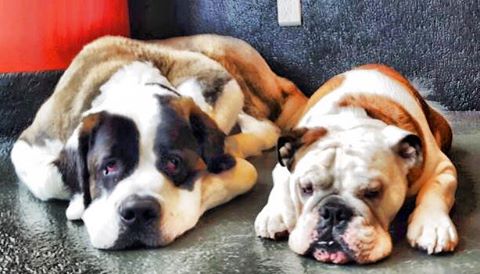 I’m Yama the Bernard, a very opinionated Saint Bernard. After sliming the editors for months, I finally got my own column in Dog City Digest to bark my dogma. I felt it was important to have my own column spokesdog because we are frequently misunderstood. After all, you are human and we are dogs. Here’s my second chapter about common dog myths!

This is a total myth. I have a gigantic nose, and it’s often wet, dry, warm, cold, crusty or covered in yogurt or peanut butter. The skin condition of a nose should not be used to determine his health. If your dog has a dry nose, it simply means he has a dry nose. To prevent cracking, you can slather some coconut oil, olive oil, or cocoa butter on his nose, but he might spend the day licking it off like I do. Rather than the skin condition, see your vet if you see unusual signs such as excessive discharge or difficulty breathing.

Advances in science have finally debunked the myth that we only see in grey tones. We have color vision, but it greatly differs from human understanding of color vision. We have two color detecting cones in our retina, while humans have three cones. Our ability to detect color is similar to people who are color blind to red and green tones. For dogs, a bright red apple looks like a brown apple. Green, yellow and orange all look yellowish. To us, a purple grape is little blue balls and the turquoise ocean looks grey. You might have superior color vision to us, but we have the ability to see better in the dark. Like humans, canine retina contains rods, which are light receptors that are sensitive to light, darkness, shapes and movement. The rod to cone ratio is higher than humans which allows us to see better in dim light and detect motion. That’s why we are awesome hunters, security guards and fly catchers!

● Multiply a dog’s age by 7 to determine his age in human years.

The math is not that simple because we mature faster than humans early on. Size and breed matters too. Smaller breeds mature faster than large breeds but live longer. A 145lb giant like me matures mentally and physically slower than a Chihuahua, but by 8 years of age, I get senior discount while the Chihuahua still marks the park with macho enthusiasm. Healthy toy breeds aren’t considered senior status until they are 9-10 years old, while mid sized breeds are somewhere in the middle. Here’s a graph that’ll allow you to calculate your dog’s age in human years with better accuracy, and it’ll explain your dog’s behavior. He’s humping the cushion because he’s a teenager! 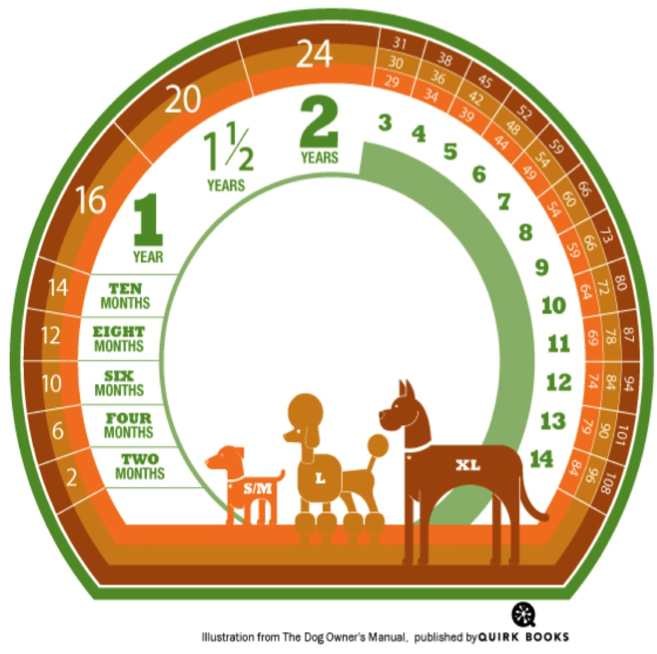