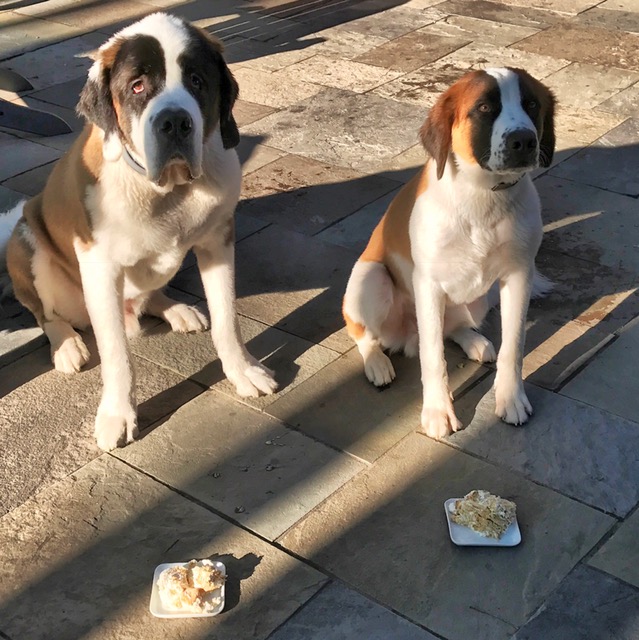 Dogs are pack animals, which means they require a social, hierarchical structure.  They thrive in an environment that provides stability, predictability, structure and consistency, and the majority of behavioral issues with dogs are a result of this lack of hierarchical framework.  Without it, the dog is confused and feels the need to lead the human owner– which can have disastrous consequences, particularly when cohabitating in an urban environment where challenges of dog ownership are many.

If the dog does not see the human owner as an authority figure, they do not feel the need to listen and obey.  If the human owner’s expectations and behaviors are inconsistent, the dog’s behavior will also be inconsistent.  Without a clear pack leader, the dog will assume the role as a leader in order to preserve the integrity of the pack.  Why? It’s because they are intelligent, hard working, thinking communal creatures who require purpose, challenges, rules and regulations.

Dogs in urban environments lead monotonous, non-challenging lives.  They do not perform tasks they were bred for, and are not free to run, hunt, or socialize with fellow dogs at will.  Most behavioral issues are caused by a lack of proper structure and a build up of under utilized energy.  This means even more, urban dogs require an organized routine for feeding, exercising, eliminating and playing to give them predictability and stability.

You might be feeling guilty about providing structure and demand obedience from these utterly adorable fuzzy guys.  But they are not stuffed animals.  Concretely, they are canines– proud hunting mammals of the animal kingdom, and they need leadership from you in order to be safe and sane.

Here are a few simple tips to let your dog know that you’re the alpha of the pack.  Implement these tactics on a daily basis, and you’ll soon see that your dog is much happier as a beta of the pack.

Do Not Allow the Dog to Lead the Walk

If you’re allowing your dog to walk ahead of you, you’re making the message very clear.  He is the boss, and you are his subordinate.  You are allowing the dog to choose where to walk, what to sniff, who to greet, and at what pace to walk.  Dogs are nomadic creatures and enjoys nothing more than exploring the world with you.  Nothing builds a better bond than roaming together– but in order to assert your authority, you must lead the walk.  This means, he should not be allowed to pull, lunge, bark at passer by dogs, exit first, or dictate the walk in any way.  When walking through common areas of buildings and through the concrete jungle, the leash should be short with a slack.  Keep the dog in heel position to the side of your body.  The pace should be brisk enough to compel the dog to follow you.  Incessant sniffing and marking should be discouraged. Retractable leashes should be reserved for hiking or in open areas where the dog is encouraged to be free to exercise. It’s a very dangerous device in the city environment, as the dog can get injured in fast moving elevators, run after a cyclist or jogger, or get into trouble with passerby dogs.

Do Not Allow the Dog on the Furniture

If the dog is allowed on the bed or the couch with you, he is your equal.  A prudent rule of thumb to establish hierarchy is to expect all four paws on the ground at all times.  Provide the dog with his own space such as a crate, bed, or a pen.  Teach him to be independent and enjoy his own space.  If your dog already thinks the bed or the couch is his domain, retrain this behavior with tethering.  Attach a short cotton rope or a cotton leash that has been cut to a shorter length to the dog’s collar to redirect the dog from being in undesired locations.  As you lead the dog off the couch or bed, firmly command “OFF”, and praise the moment his feet lands on the floor. Lead him to his bed or crate, “SIT”. , and “STAY”. Praise when he stays.

The purpose of the tether is to allow you to have control over the dog until you can establish control with your voice.  A tether is lighter than a leash so the dog feels as though he is free.  If the dog chews on the tether, soak it in Listerine or Bitter Apple spray, and reduce it’s length as you gain better control of the dog.  Once the dog knows the rules, are not displaying any dominance, and have reached emotional maturity, snuggling on the bed by “invitation only” is appropriate.   After all, that’s the best part of dog ownership.  Hanging out on the bed or the couch with the owner should be a privilege of well trained dogs who understand the home’s hierarchical structure.

When Yama, my 155lb St Bernard first came to my home at one year old, he was found lounging on my bed.  When I approached Yama to get him off, he growled– a warning to claim the space as his.  Now that he has been cohabitating with me for over five years, he now knows that he is allowed on the bed only when I tap on the edge of the bed as invitation.  When I command him to get off, he must expeditiously get off, and he is never to be on the bed if I am not on it.

Dogs Should Not Jump on People

No matter what size, dogs should not jump on people.  The last thing you want is for your dog to jump strangers who are fearful of dogs. By preventing this behavior, you are also protecting your dog.  When he jumps on you, abruptly push him off, declaring:  “OFF” and praise the moment his feet lands on the ground.  By petting a dog that has jumped on you, you are inadvertently reinforcing the behavior.

Do Not Allow a Dog to Be Mouthy

Keep your hands away from a dog’s mouth, and if he is mouthy, stop playing with the dog.  Never allow a dog to understand the power of his mouth through games such as tug of war.  If the dog nips you through play, loudly declare “OUCH!” and startle him.  Your dog needs to know that it hurt, and must be deterred from using his mouth.

Never Allow a Dog to Mount You

If a dog attempts to mount you, abruptly push him off “NO!”.  Spay or neuter your dog early to prevent these undesirable behaviors that can get him in trouble in canine social settings.

Do Not Allow Your Dog to Demand Bark

A dog should not be telling you what to do. If he is barking at you for treats, food, attention, or to throw a ball, firmly command “NO” and ignore him.  By surrendering to his demands, you are taking orders from a dog.  The last thing I need is for my 165 lb St Bernard, Masa and 155lb St Bernard, Yama to tell me what to do with their echoing baritone barks. 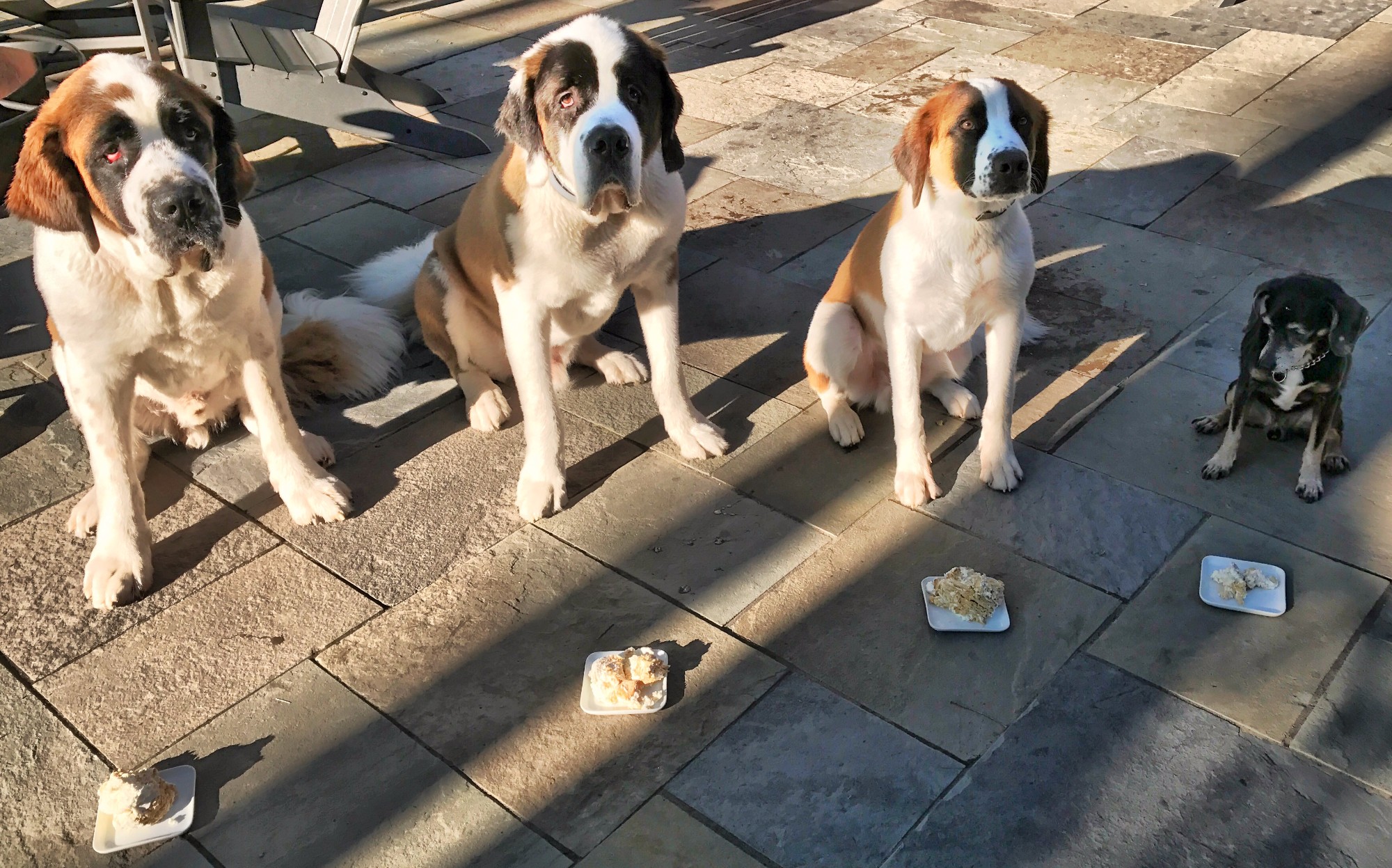 You Own the Food You Feed

The pack leader owns the food, not the dog.  Feeding should be done twice a day, and free feeding should not be allowed.  The process of feeding is an essential exercise in establishing the hierarchy between you and the dog.  When you are preparing his meal, place him in a sit/stay in the same feeding location (or in the crate).  He should not follow you around to do the “feed me” hustle.  He must remain still in the feeding corner, or the food does not arrive.  Bring the bowl to him and make him sit.  Put the bowl down, commanding “leave it”.  He is not allowed to sniff or touch the food until you have released him.  He should be looking at you, NOT the food bowl prior to release.

Never Let a Dog Run Out of the Door

The pack leader always exits first.  The dog should never be allowed to bolt through doors or elevators.  Practice SIT/STAY at doorways frequently.  Open the door in front of your dog– he must remain in sitting position until you give him permission to walk through.  Teaching your dog that an open door is not an invitation to bolt out is an essential rule that will keep him safe from harm.

Don’t Let Your Dog Be a Thief

A Dog should know what belongs to him, and what belongs to his pack leader.  Never feed the dog from the table– while you eat, he should be placed at a distance and be praised for not showing interest in your food.  Provide the dog with suitable toys that belong to him. If he is caught in the act of carrying your things such as socks or shoes, abruptly remove the item from his mouth– “NO!”.  Replace it with his toys to teach him that he is allowed to play with things that are designated to him.  This also prevents dogs from swallowing items he should not be consuming, which is ultimately for his safety.

A Dog Should Not Have Free Reign of the House Until He is Fully Potty Trained and Respects His Home.

Freedom to roam the house is a privilege of well trained dogs. If he is being destructive, claims the furniture or soils the home, basic obedience and crate training is highly recommended.  See Crate Training 101 in this blog.

Keep Your Exit and Return Boring

It’s wonderful to return home to a dog that’s thrilled to see you.  But if your dog is anxious to be home alone or if he is young, keep your exit and entry boring.  Don’t dote on the dog or provide extra attention when you return home while he is dancing with joy.  Part of the hustle is the release of pent up anxiety.  About an hour prior to departure, start ignoring him.  Prepare him to be calm and relaxed when you’re at work.  When you return home, greet him only when he has settled and is no longer demanding attention.